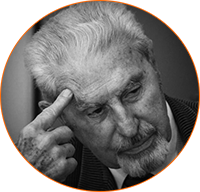 Vittorio Dan Segre (1922 – 2014) had an adventurous life. Emigrant by necessity and cosmopolitan by choice, he fled Italy for Palestine in 1939 in response to the passage of racial laws. In 1941 he enlisted in the British Army in Cairo, and in 1948 he participated in the war that would lead to the birth of the state of Israel. After serving for years as an Israeli diplomat (1967-1989), he taught International Relations at universities in Oxford, Boston, Stanford, Haifa, Milan and Turin. In 1991 Dan Segre participated in the creation of the ETHICA Forum Association and served as a member of its scientific committee. Six years later, he founded the Institute for Mediterranean Studies at the University of Lugano in Switzerland.

Throughout his life as a diplomat, scholar, and writer, he was guided by his intellectual curiosity, commitment to humanism, and an interest in deepening the spiritual dynamics that guide individual choices. For Dan Segre, human dignity, human relationships and an empathetic understanding of the Other came before politics. His acute and perceptive vision on the great themes of geopolitics can be found in his large archive and in his books, among which we mention: